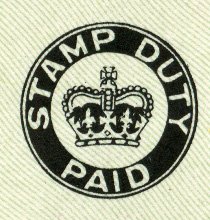 STAMP duty could be scrapped in designated areas to encourage investment and development in more deprived areas of Wales, according to a leading North Wales estate agency.

The UK Treasury is conducting a consultation on giving responsibility for stamp duty to the National Assembly in Wales.

Dafydd believes that should control of STD be handed to Cardiff Bay, a stepped approach to the amount payable when buying property should be applied. Sales of residential properties are STD-free up to the value of £125,000 and attract a 1% tax between £125,000 and £250,000, with higher percentages for higher value bands. Yet the tax becomes payable on the whole amount, not just the amount over the value band. The Taxpayers’ Alliance believes this is unfair, as does Dafydd Hardy.

“Firstly, I believe that the threshold should be increased to £250,000,” he added.
“Then the calculation of STD should be on a graduated basis, ie a percentage over and above the threshold, and not a "slab tab" tax on the whole amount.
“Welsh Government could also allocate poorer areas where STD is not paid at all, therefore encouraging new developments and infrastructure.”