This attractive little town has a little bit of everything: great places to eat and drink, beautiful scenery, a diverse selection of shops (everything from tiny independents to chain stores; buckets and spades to luxury tableware), all the necessary amenities, and a glorious coastline to explore. Porthmadog Sports Club is a popular venue for both sporting and musical events, and has in past years been the venue of a variety of music festivals including 'Miri Madog'.

The town was developed during the height of the Welsh slate industry in the 19th century. William Maddocks built the 'cob' - a sea wall to reclaim land from the sea for agriculture - in 1810. Both the town and its very close neighbour, Tremadog, take their names from their founder.

Diverting the river Glaslyn created a harbour large enough for small ocean-going ships to visit, and in 1825 the first public wharves were built - closely followed by further wharves built by quarrying companies in order to export their slate from the Welsh mountains to be used in a variety of contexts all over the world. Another nearby town which prospered during this era - Blaenau Ffestiniog, some 11 miles away - came to be known as 'the town that roofed the world', such was the success of its quarrying industry. It was during this time that the Ffestiniog Railway was created, to transport slate from Blaenau Ffestiniog to Porthmadog where it would be loaded onto ships. Today it, along with its sister line, the Welsh Highland Railway, is a popular tourist attraction and one of the most enjoyable ways to see the local countryside. 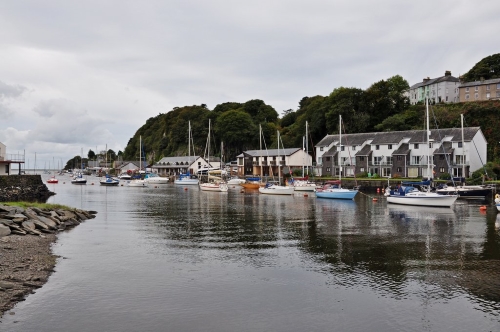 Nearby attractions and places to visit include the vast beach at Black Rock Sands, which is so large that visiting cars can park on it. The Italianate village, Portmeirion, is located within a couple of miles of Porthmadog. The towns of Caernarfon, Pwllheli, Criccieth and Blaenau Ffestiniog are all within easy travelling distance of Porthmadog, while a little further afield the historic towns of Dolgellau and Machynlleth are very much worth a visit.

Properties in Porthmadog are extremely varied in size, style and value; in the town centre there are small streets lined with quaint and cosy Victorian and Edwardian terraces, while on the fringes of the town there are many spacious properties with plenty of outdoor space which are suitable for the larger family.

Porthmadog is an attractive little town; stand in the right spot on the high street and you'll be rewarded with fantastic views in every direction, including the distinctive peak of Cnicht - the Welsh Matterhorn - in the distance. You'd be forgiven for thinking a town that has become so reliant on the tourism industry would be quiet during the off season, but this isn't really the case; it's possible to have a great night out including a good meal and a lively pub visit even during the darkest days of winter. There's a niche somewhere between rural and urban living that many towns struggle to fit into, but Porthmadog does it with ease and, importantly, it does it very well indeed.