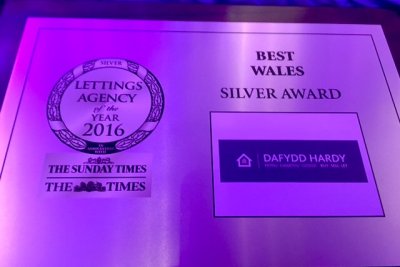 Dafydd Hardy have been awarded silver Lettings Agency, Wales, at the Lettings Agency of the Year Awards 2016 in association with the Sunday Times and The Times and sponsored by Zoopla Property Group.

On Friday 10th June the winners were announced in what is the most highly regarded awards in the lettings industry at the Lancaster Hotel, London.

Award winners were decided following a rigorous and thorough judging process by a panel of 20 industry experts who assessed initial entry submissions before conducting an extensive review of the entrants, which included over 150 hours of telephone interviews and independent mystery shopping exercises. The judging of the awards is overseen by The Property Ombudsman, Katrine Sporle, as Chairperson of Judges, alongside Mark Hayward of the NAEA who acted as Arbiter.

These awards have become widely recognised as the most prestigious and difficult to win. With more entrants than ever before, thousands of offices were represented this year - but only the very best were crowned winner.