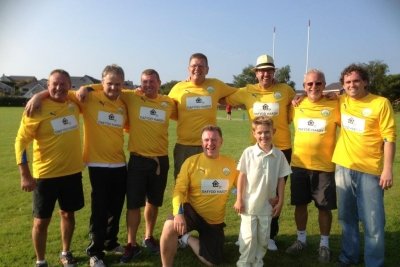 Over £5,000 of the total raised came from the sports memorabilia auction, with Dafydd Hardy acting as auctioneer for the evening. Items auctioned included shirts signed by Sam Warburton and the British Tour de France team.

Dafydd Hardy also fielded a team in the charity cricket match against other local businesses - and came away with the wooden spoon!

Dafydd said: “It was a great day and everybody who participated really enjoyed themselves.

"I am still stiff from trying to bowl and bat and will leave cricket to the younger person, I’ll stick to golf!"

Howzat Co was the first event organised by Gafael Llaw, and further events are planned over the next three years. Proceeds from Howzat Co will be donated to the Dewi Ward at Ysbyty Gwynedd, Alder Hey Children's Hospital in Liverpool and the children's cancer charity Clic Sargent.

To find out more or make a donation, please talk to Gafael Llaw on Twitter or Facebook.

Your Valuation in the region of...

Whilst this instant valuation provides a guideline, your local Dafydd Hardy property expert will be in touch to provide a more accurate valuation taking into account improvements to your property, the local market and more.

Recently sold in the area

These properties near you were sold recently.